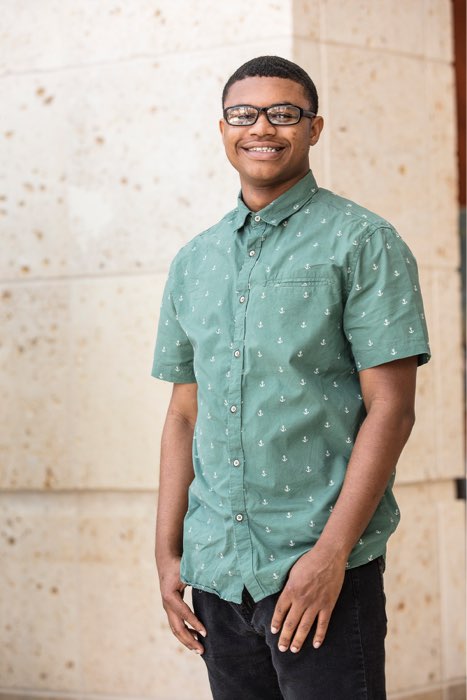 Things are looking golden for Tre’Zjon Cothran. The Tarrant County College alumnus transferred to Texas Wesleyan University on full scholarship, and he is set to soon be the first college graduate in his family. Cothran has an ambitious career path ahead of him that includes becoming a police officer, an attorney and a judge. But that bright future wasn’t just handed to him. Growing up in south Fort Worth, Cothran was surrounded by gang activity. Some of his friends and relatives lost their lives to violence; others went away to prison. Cothran walked a fine line to get where he is today.

“I overcame my environment by not participating in criminal activities, but I also never turned my back on those around me,” explained Cothran. “I wanted to help them and always tried to speak knowledge and treat everyone equally.”

The path to college was far from a given for Cothran. He was considering joining the armed forces when he received an email stating he was accepted to TCC. He decided he would give higher education a try. While he enjoyed his classes at Trinity River Campus, something was missing.

“It did not feel much like college for the simple fact that I went to school and went straight home, just like high school,” Cothran recalled.

Enter the first of three mentors who would change his life: Steven LeMons, coordinator of Trinity River’s Writing & Learning Center. Cothran visited the center to get assistance with a paper during his first semester. The two struck up a conversation, and LeMons told Cothran about Men of Color, a student support program open to all but specifically designed to assist black and Hispanic males—who, nationwide, tend to enroll in higher education and complete their studies at lower rates than other demographic groups.

“I think Men of Color is a good fit for any young male who is trying to navigate his way through college,” said LeMons, who helped found the group at Trinity River. “It gives you an opportunity to bond with individuals who may be experiencing the same thing. Guys in general have trouble expressing weakness or asking for help. When you are involved with a group that answers your questions before you even ask them, that’s a good thing.”

Men of Color connects students to faculty and staff mentors and provides resources to boost academic achievement and leadership skills. The success rate is significant, with 77 percent of fall semester participants returning to TCC in the spring. In comparison, black and Hispanic men who aren’t involved in Men of Color have a retention rate of 43 percent.

“The program creates a level playing field,” said Freddie Sandifer, Men of Color coordinator. “Black and Hispanic men have the capabilities to succeed, but we may have to do more on the front end to ensure they take advantage of the tools and resources that are out there. Men of Color is about making these students understand that college is indeed for them.”

After filling out an application for Men of Color at LeMons’ recommendation, Cothran met Sandifer—who then connected Cothran to Sheldon Smart, communications and speech instructor, who would become Cothran’s official mentor through the program. Each man played a key role in molding Cothran into who he is today.

“Mr. LeMons was someone I could come to and discuss personal matters with and ask for guidance,” Cothran explained. “We discussed life-changing events and he gave me advice about how not to be distracted during the difficult times throughout my life.

“Mr. Sandifer taught me the business side of growing into a man. He taught me to carry myself as a professional and how to properly dress and network. Mr. Smart allowed me to see my capabilities and that I could achieve my goals. He taught me to never be afraid of chasing my dreams.”

The three mentors became a network of support, guiding Cothran through three semesters at TCC. He attended Men of Color workshops and events and even became a student worker for the organization. With a new sense of confidence and vision for his future, he applied and was accepted to Texas Wesleyan.

“Tre’Zjon has overcome quite a lot,” said Smart. “He has come a long way from growing up in a rough neighborhood and being financially poor. What I also admire about him is that he always has a job. This guy is willing to work hard for what he wants. He really does work long hours to make sure his mom and siblings are okay, all while attending school.”

After finishing his bachelor’s degree this December, Cothran plans to go into criminal justice—beginning as a police officer.

“After losing several friends and family members to gun violence, it made me want to be hands-on about removing criminals from the streets,” Cothran remarked. “I want to feel as if I am making the community safer for children. I also feel that there are not enough police officers in the field who can relate to someone of that background.”

Cothran wants to do more than take criminals off the streets; he wants to ensure justice is served. He would like to one day go to law school and eventually become a judge. His mentors have no doubt he will reach those goals.

“Other students can learn from him about hard work and determination despite experiencing a difficult and challenging home life,” noted Smart. “He also isn’t afraid to ask questions and seek advice and counsel.”

Cothran plans to use his experiences with Men of Color and the mentorship of LeMons, Sandifer and Smart to make a difference in the lives of others.

“Now that Tre’Zjon has been mentored, he feels a responsibility to give back,” said Sandifer. “He’s constantly encouraging those he grew up with to get an education and get engaged on campus.”

Cothran is already having an impact in the community, returning to TCC recently to serve as a speaker for a Men of Color event and serving as an officer for a similar group at Texas Wesleyan.

“Students can learn quite a bit from our workshops and seminars, but when you’re learning from a fellow student, you’re getting something from someone in the same time zone of life,” noted LeMons. “Tre’Zjon can share his first-hand experiences, how he succeeded and cultivated key relationships.”

For Cothran, it all comes down to those relationships—and he encourages other students to take time to get to know faculty and staff.

“With the contributions of these gentlemen, I realize I have a voice that not many others have,” said Cothran. “It made me feel that I could possibly be a role model for the next generation. Seeing individuals from similar backgrounds in successful positions gave me hope and confidence.”