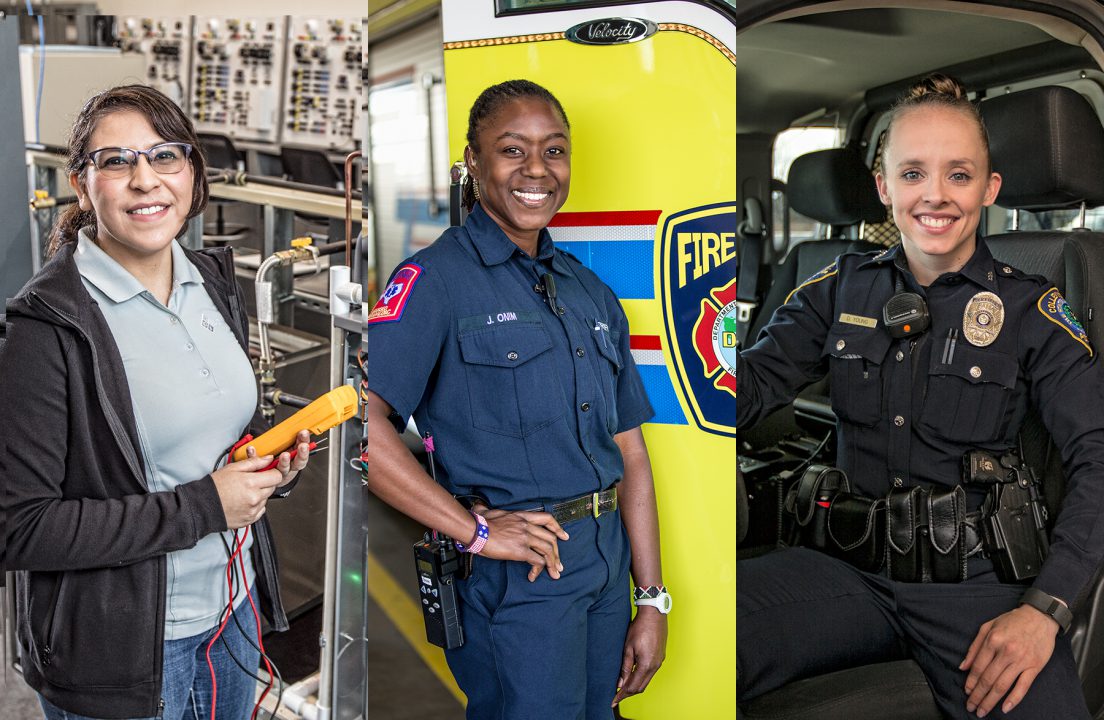 TCC: What drew you to HART?
MCS: It’s something that I have always been around. My dad has worked in heating, ventilation and air conditioning as long as I can remember. My brother works with him and even my mom has worked in the field before. She’s one of two women I’ve known in the industry.

TCC:Did anyone discourage you from your career goal?
MCS: I’ve always had very positive reactions to my career choice. My family and friends have all been very supportive. My husband thinks it’s really cool. TCC encourages women in the program, and many of the professionals I’ve met encourage getting more women working in this field.

TCC: Do you see the industry evolving in that direction?
MCS: The industry is growing very quickly and the workforce is aging. It’s hard work, and you can only do it for so long before it wears you out. If more women don’t go into the field, it will be difficult to keep up with the growth.

TCC: Are there challenges you’ve experienced as a woman in this area of study?

MCS: In my classes, the guys seem a bit apprehensive or uncomfortable at first, but they get used to it. The more I open up and act normal, the more they relax. Sometimes it’s a bit physically demanding, but everything has its trick—and it helps that my dad is on the small side too, so he’s shown me how to work around that. Success comes down to knowledge and applying that knowledge, regardless of gender.

TCC: What general challenges did you overcome to get to where you are today?
MCS: I’m one of the first people in my family to finish high school, let alone go to college. That has its own set of challenges. My commute is tough; I live in Johnson County so it’s a bit of a drive. The out-of-county tuition rate and the cost for tools are not the easiest on the budget, but I think it’s worth the education and the opportunity TCC offers. I’ve also been working full time while going to school. I take my classes in the evening and don’t see my family at all during the week.

TCC: What advice do you have for students in a similar position?
MCS: You have to tell yourself that it is something that you want to do despite the hurdles and the way people will look at you. Sometimes you have to go the extra mile and maybe prove yourself more—but if you’re willing to put in the effort, gender becomes a trivial thing.
Mel Chaparro Santillan will graduate this spring with her Associate of Applied Science and two technical certificates. She plans to eventually get her contractor’s license and start her own residential installation business.

TCC: Why did law enforcement interest you?
DY: I’ve always had a desire to help people, in any capacity. While I was working for Child Protective Services, I was drawn to the law enforcement aspect, as compared to the civil aspect.

TCC: Were you the only woman in your TCC Police Academy cadet class?
DY: I was one of 10 females in my academy class! It was the most females they had ever had in one class and it was so empowering.

TCC: Have you faced professional challenges related to your gender?
DY: Aside from carrying fellow cadets during physical training, the only challenges I faced as a female cadet were in my own head. I wanted to prove myself to everyone because it is natural for people to doubt females as officers before they would doubt males as officers. I don’t hold that against anyone; I just work harder in hopes of squashing that thought process. Feeling challenged merely because I am a female in law enforcement is not a daily thought I have. I feel challenged more as a rookie.

TCC: Did anyone discourage you from pursuing a career in law enforcement?
DY: I don’t recall anyone outwardly discouraging me, but I have received incessant disbelief. I’ve heard, “But you’re so girly!” I’ve had a woman call dispatch to confirm I was really an officer on a day I was working in street clothes with my badge and gun visibly displayed on my hip. On that same day, I had a man say, “Like a cop cop? Like a real cop? Like, you drive a cop car??” On a traffic stop, a female passenger said, “Are you driving that cop car all by yourself?? You look 16!” Whatever their intent, none of it was encouraging and none of it was flattering.

TCC: What would you say to people going through that kind of challenge?
DY: Never give up! Plenty of people will doubt you, especially if it’s something against the norm, but that does not make it impossible! Women in law enforcement are such a crucial piece to the puzzle of progressing our society. Girls and young women should believe they are strong, powerful and capable of anything.
Dara Young attended the TCC Police Academy in fall 2013 as a member of Class 160. She earned a bachelor’s degree in social work from the University of Texas at Arlington and is one of five female officers on Colleyville’s 43-officer force.

Janet (Jo) Onim
Graduate, TCC Fire Academy
Firefighter Paramedic, Dallas Fort Worth International Airport
TCC: Why did you become a firefighter?:
JO: I’ve always been a bit of a tomboy. I believe that played a huge role. Secondly, physical activity has always been very alluring for me. I enjoy the results, the discipline, goal setting and challenges. Firefighting put those things together. I tried Corporate America for a few years and felt like a hamster in a wheel, punching in and punching out.

TCC: You were the TCC Fire Service Training Center’s first female class captain. What was that like?
JO: The fact that within about a week of interacting with my classmates, they saw leadership potential in me was a huge honor—but more importantly, it was a great responsibility and opportunity to grow.

TCC: Are there challenges you have faced as a woman? Or does that not factor into your mindset?
JO: The fact that I am female occupies, I would say, the middle part of my mind. Never the forefront—except on the very rare occasion that someone brings it up. It does take, for me, extra effort, time and dedication to hone and condition my physical strength. The other side of the coin is the general perception. It is fun to see the surprise on the faces of people, and especially children, who meet a female firefighter.

TCC: How many female colleagues do you have?:
JO: Our employee population includes 17 female firefighters out of 189 certified firefighters, all ranks. That is nine percent of the total staffing. Since I’ve been hired, more females have joined the force than were on when I was hired, so there is definite growth. Departments are trying to encourage more females to apply.

TCC: What challenges in general do you face on the job, and how do you overcome them?
JO: The job is very dynamic; I have to be agile and adaptable. It also can take a toll on us with some of the hard calls we respond to. I have to ensure I am balanced and healthy mentally, spiritually and physically, so I can come back and do it another day. My family has been my greatest support. I am humbled and honored by them all.

TCC: What advice would you have for students who want to pursue an atypical career?
JO: This is a great

country—one that affords us the ability to overcome. Be the person you were created to be. Break barriers. Crack ceilings. If indeed one feels the calling—for most of these careers involve callings—then pursue it with everything you have.

Janet Onim was part of the TCC Fire Academy’s Class 65 in spring 2012. She serves with Dallas Fort Worth International Airport’s Department of Public Safety Emergency Medical Services, Station 5. Onim holds a bachelor’s degree in education from Kenyatta University in Nairobi, Kenya, and a master’s degree in information science from the University of Texas at Arlington.