For Erin Casey, free time is hard to find. Since graduating from Tarrant County College in 2012 with her associate degree in American Sign Language interpreting, she has bridged the gap between hearing and deaf individuals in schools, emergency rooms, graduations, conferences and more. She also mentors TCC’s interpreting students and is preparing to return to the classroom as an adjunct instructor. But one mother’s wish prompted Erin to embrace a huge, new responsibility.

Tracey has a two-year-old son who has endured difficulties with his ears and hearing since birth. Samuel’s inability to hear properly led to speech problems, and Tracey became desperate to communicate with her son.

“Samuel gets so frustrated not being able to tell me what he wants or needs,” she says. “He just falls down and cries.”

Tracey taught Samuel a few signs from a book and realized the potential for sign language to change their lives. She wrote to the Kidd Kraddick Morning Show about her dream to learn sign language. Erin’s friend works for the radio program—and when Erin heard about Tracey and Samuel, she didn’t hesitate to volunteer.

“Tracey is so anxious to learn sign language, and that is just amazing,” Erin says. “Unfortunately, not all parents are like that. Samuel’s life will drastically change. He’ll be a different kid within a couple of months.”

Erin and Tracey arranged for three months of private lessons. As Tracey learns, she will teach Samuel.

“She is one of the hardest workers I know and one of the most caring people I know,” says Sheppard. “Erin has always been one to lift others up and give back.”

Erin maintained her positive attitude despite serious personal challenges that threatened to derail her education and career. During college, Erin shared one car with her mother and brother, and the family practically lived out of it. Money was very tight, and Erin didn’t see how she could finish the interpreting program.

“Erin was a very talented student with so much ahead of her. There was no way I was going to see her leave the program,” says Sheppard. “We started to work on ways to get her transportation and other assistance.”

Erin returned to class, but in her final semester, her hands began tingling and going numb—a serious concern for anyone and especially for a sign language interpreter. Shortly after graduation, Erin was hospitalized and diagnosed with multiple sclerosis.

“Not only did she come back from this,” says Sheppard, “she roared back, determined she would not be defeated by MS.”

Erin took charge of her health, going on a diet and exercise program and losing more than 100 pounds. She also passed her state certification for sign language interpreting and took on a full-time job. Today she is an advanced-level interpreter. Sheppard believes Erin’s experiences will make her an excellent sign language instructor, for college students and for Tracey.

“Erin knows what it’s like to go through a very challenging program with additional personal challenges and come out on top,” says Sheppard. “We are proud to count her among TCC alumni.”

For Erin, volunteering her time for Tracey is a way to show gratitude for the blessings in her own life.

“I’d been looking for a way to give back, and Tracey’s story touched my heart,” says Erin. “I don’t need recognition for this. It’s just the right thing to do.”

Listen to Tracey and Erin’s story on the Kidd Kraddick Morning Show.

The first in a year-long series celebrating TCC’s 50th anniversary through the lives of its students. 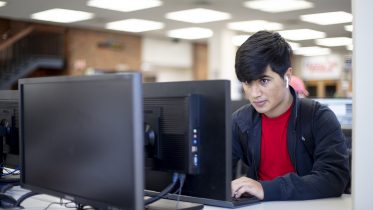 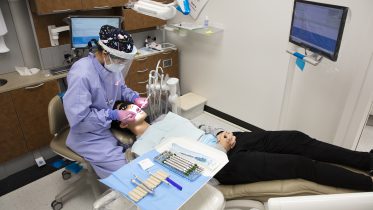