Not only did this year’s commencement feature all of the traditional “Pomp and Circumstance,” but it was also full of Tweets, live streaming, status updates and picture uploads, as the ceremony went high-tech.

The scene outside of the  Tarrant County Convention Center was typical — friends and family posing for pictures; flowers and balloons being given as congratulatory gifts; kids squirming in their dress clothes.  Once inside, only graduates were allowed in the staging area, which caused many of them to turn to their smartphones to see if their family found good seats, or to advise their friends where to park.

With the pressure of arriving on time and checking in behind them, the graduates found themselves with a little time to kill before the ceremony. So they also used their cell phones to comment on the event, take pictures of fellow graduates, and share them with the outside world.

This year, TCC jumped into the picture-sharing frenzy by offering everyone at the ceremony the opportunity to email their behind-the-scenes shots to TCC’s Flickr Photostream and to post their comments about the ceremony on TCC’s Facebook Page.

Graduates were also invited to follow TCC’s Twitter feed  and add their own comments throughout the ceremony. Tweets included bits of advice gleaned from Chancellor Erma Johnson Hadley’s speech; friends issuing congratulations; and inspiring words from commencement speaker Danielle Miles, who was also graduating that night.

Those who were unable to attend the ceremony in person could see live video streaming of the commencement online — a TCC first. TCC graduate John Humphrey, who happens to be an English major from England, said he was grateful that his family back home was able to see him graduate.

So during the long-held graduation tradition of the past, we were able to use the tools of today to watch our graduates step into the future. We can only imagine what next year will look like. 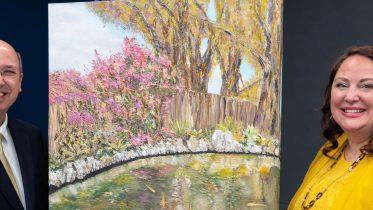