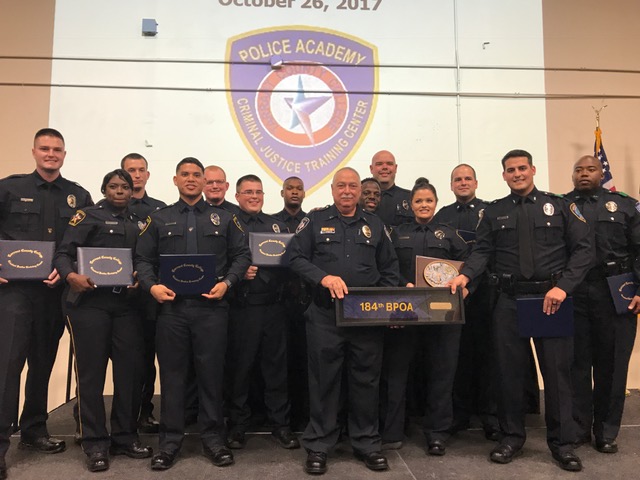 Our award recipient, is from Brooklyn, New York and started his law enforcement career with the Benbrook Police Department in 1983 and has been there ever since, currently part-time.  He is assigned to the Professional Standards Unit where his duties include training coordinator, background investigator, program manager, policy advisor and writer.

Tony Giardino is an assistant professor of government at TCC South Campus and teaches government courses.

Tony holds a Master Peace Officer Certification, is a licensed police instructor, crime prevention specialist and while assigned to the criminal investigation department (CID) was named detective of the year.

A graduate of the 12th Basic Police Academy here at TCC, he holds a master’s degree in political science.  He’s authored two college textbooks on Texas state and local government and he’s currently working on a third book in conjunction with the Texas Tribune.

He travels the state serving as a volunteer assessor for the Texas Police Chiefs Association Best Practices Recognition Program and has assisted law enforcement agencies across the state attain the association’s status as a recognized agency. As program manager, he was responsible for the Benbrook Police Department becoming the first agency in Tarrant County to be recognized by the program.

He and his wife Lisa have three sons, the oldest serving as a prosecutor with the Tarrant County District Attorney’s Office and the youngest instructs defensive tactics and ground fighting.

He has been teaching a variety of subjects at our academy for 24 years and says he takes great pride in mentoring the newest generation of officers entering the profession.